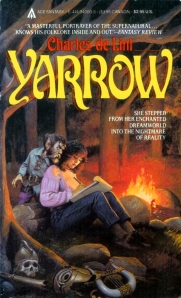 Cat lived in a land of dreams, crossing over the borders of sleep into a magic realm where gnomes lived among standing stones and selchies beneath the waves; where antlered Mynfel walked by moonlight; and the harper Kothlen told stories of the ancient days…

When she woke from her travels she told her own stories about the Otherworld. Her publisher called her novels fantasy, but Mynfel’s domain seemed more real than the streets of Ottawa… until a thief came out of the night and stole away all her dreams. END_OF_DOCUMENT_TOKEN_TO_BE_REPLACED